Guinea-Bissau: Praetorians can be useful 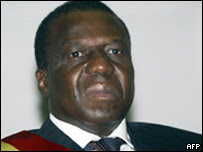 A recent AP article on the assassination of Guinea-Bissau's president, Joao Bernardo "Nino" Viera, made me think of the uses and misuses of an executive bodyguard.

Apparently, when gunmen made an unsuccsesful attempt against Viera life four months ago, the army -- many of whose members belong to a tribe hostile to the president's tribe -- failed to protect him. Had it not been for Viera's private bodyguard, he almost certainly would have perished in the assault.
Posted by Cyrus at 11:12 AM

I was a bit terrified at first place for my car but I was really relaxed after they transported my favourite car I ordered without any single scratch! Thumbs Up for A1AutoTransport, Inc.!