Thoughts on the Praetorian Guard and Chapter XIX of The Prince 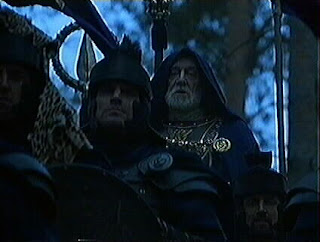 After a hiatus, I am making a detour from the Blogging the Discourses posts.

The question on my mind today: How does a state protect its leader without creating an organization that will kill or depose the leader to further its own interests?

To further complicate matters, this group of armed men can, in most cases, be destroyed only with another body of armed men dedicated to the protection of another individual or group of individuals, e.g., the legions of Septimius Severus. Thus, the new body of armed men immediately takes the place of the body they eliminated. (Note that this body may be loyal to the one that first commanded them, but may not share that loyalty with his or her successors.) This dynamic appears to derive from the fact that one man alone, no matter how well-armed, cannot physically destroy or politically eliminate a group of armed men. The leader's protective detail thus effectively holds him or her hostage, unless some other force restrains them.

So what can counterbalance the power of the leader's bodyguard?

Loyalty to person: As noted above, personal loyalty to the leader is one such force. This dynamic is often seen in the retinue of a military strongman, whose troops are loyal to him (or, far less often, her) based on years of military service together. Thus, the strongman usually is the founder of his own bodyguard, much like the Emperor Augustus enjoyed the full loyalty of the Praetorian Guard he created. Roman history alone, however, suffices to demonstrate how this loyalty often will not extend to the original leader's successors.

Loyalty to regime: Loyalty to the ideals of the regime is another counterweight. Most Western democracies seem to exhibit this dynamic. The U.S. Secret Service could assassinate the President any time it pleased, but that scenario seems almost unthinkable in the present day. The Secret Service agents are loyal to the United States of America; they do not kill even Presidents they might personally or politically despise. This stands in sharp contrast to the aggrieved bodyguard Julius Martialis, who assassinated the Roman Emperor Antonius Caracalla after the latter had caused him personal offense.

Money: Cold, hard cash can sometimes buy the allegiance of the bodyguards. There is something weak inherent in using bribes, however, and the practice usually demonstrates the leader's political vulnerability. Unlike loyalty to the leader's person or to the regime, a ruler who pays for his bodyguards' allegiance may be defeated at the auction by a higher bidder, e.g. the bidding war between Titus Flavius Sulpicianus and Didius Julianus for the empire of the assassinated Pertinax.

Other armed men: You can, of course, use other armed men to break the power of a bodyguard. But inherent in this method is the danger of replacing the old guard with these new men. If the newcomers are loyal to you, then you have simply founded a new bodyguard whose forbearance (you hope) will last through the end of your reign. But it appears more difficult to break the old guard without creating a new one in its place. Indeed, this state of affairs -- where the bodyguard no longer serves on the basis of loyalty -- recalls Machiavelli's commentary in Chapter XIX of The Prince on the reign of the those emperors who could safely ignore the needs of everyone but the Roman legions.

One apparent exception to this rule is Constantine's extirpation of the Praetorian Guard after his victory at the Milvian Bridge -- he dispersed the troops, who had fought against him, to the far corners of the Empire, and razed their barracks. What sort of power structure replaced them, however, lies beyond my knowledge.

Size restrictions: Keeping the bodyguard small is other methods of checking its power. Restrictions on size function as a brake on the sheer amount of manpower the bodyguard can muster to control politics. After all, deposing a leader does not often further a group's self-interest unless they can control the aftermath of the deed, as Brutus and Cassius found out to their detriment. The Emperor Augustus is reputed to have kept his Praetorian Guard small for this reason.

Rotating the group's membership: Augustus also took pains to keep most of his bodyguard outside the Roman capital, and to rotate those members serving within the walls of Rome with those outside. This presumably keeps the bodyguard less organized, and less likely to choose a leader whose authority over the others could be used to strike against the ruler.

This topic feels ripe for further study. I am unaware of any serious publication examining the relationship between leaders and their personal bodyguard, although I am sure one must exist. If anyone knows, please tell me. Otherwise, go out and write something!
Posted by Cyrus at 5:04 PM